Environmental protection is an integral part of operations of the Pancevo refinery.

The Pancevo oil refinery operated by NIS continues its modernization and competitive development efforts, which will cement its positions among Europe’s best refineries. Environmental protection remains a key priority in all the plant’s development projects.

As we approach the refinery near the town of Pancevo, we notice that none of the flares are burning. Only white clouds are seen above the tall stacks reaching for the blue sky.

Fire over the gas stacks is no longer a symbol of the refinery running, confirms Vladimir Gagic, Refining Block Director in NIS.

“You are not the first to notice this. I recently ran into a retired colleague in town (of Pancevo), and he said, ‘I drove by the plant recently and it was at a standstill, the flares weren’t burning.’ I replied, ‘It is running fine, there are just no more flames and smoke for you to see,’” says Gagic, adding that the only flame on the flare is the pilot burner, that must always be on for safety reasons.

Before, on days when the town of Pancevo struggled with air pollution, the refinery was always the scapegoat. Are things different now?

The Pancevo Refinery has commenced its development journey 20 years ago, starting with projects aimed at pollution reduction and maintaining compliance with the Serbian legislation. The company invested over 150 million euro directly and indirectly to reduce pollution of air, water, and soil. What is important to point out is that there is no historical pollution here. Firsts of all, we are working on upgrading all of our storage reservoirs and filling stations to make sure no hydrocarbon is issued into the atmosphere during the loading of tank trucks.

We have done a lot to cut down emissions from our furnaces by implementing state-of-the-art burners that let off significantly less nitrogen oxides. We stopped using fuel oil and now use natural gas as our primary power source. These efforts have largely contributed to the reduced emissions of the greenhouse gas. 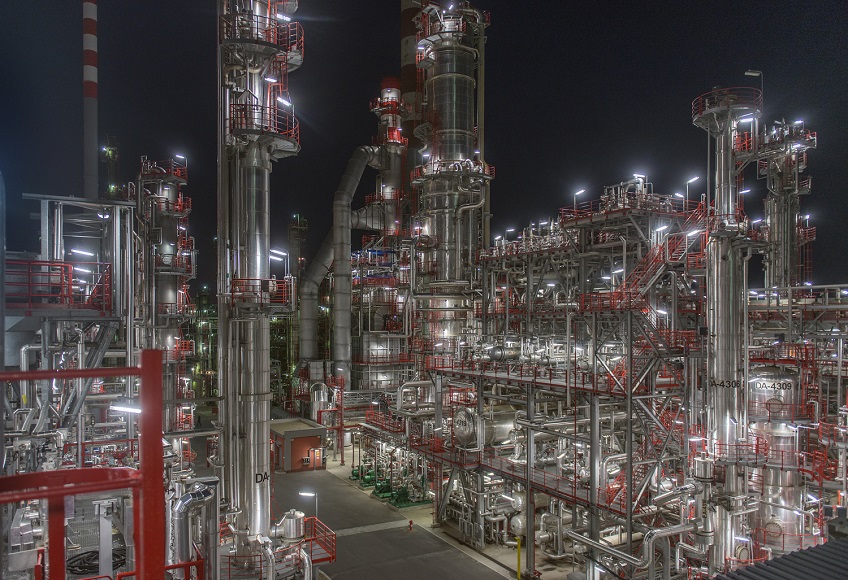 You are using the natural gas NIS produces. Does this also mean lower operation costs?

It all depends on the price spread – sometimes gas is indeed cheaper, sometimes not. We, however, are committed to using gas exclusively due to its lower environmental impact.

I would like to point out the recent FCC unit reconstruction project: we implemented the third and fourth filtration degree, which has greatly reduced solid particles emissions. One more significant project, though not initially aimed at the environmental protection, is the construction of the MHC/DHT unit, which also helped us significantly lower the emission of pollutants.

We synergize our environmental efforts with cost optimization. We no longer burn off the gas that is the byproduct of refining. Instead, we use it as fuel, which means we consume less other fuels, and save more. This is the trend in most developed countries. As energy efficiency grows, losses reduce. Due to energy efficiency, we managed to reduce auxiliary consumption and losses from 11% to 5 or 6%. This means that from 3.5 tons of crude the refinery processes we can save at least 175 thousand tons thanks to lower internal consumption and losses.

You have recently signed a contract with Lummus Technology for upgrading of the fluid catalytic cracker unit (FFC). What investments are you planning?

NIS works in the highly competitive market of South Eastern Europe, so continuous upgrading is necessary. We have multiple modernization projects, and the contract we signed in December 2019 with Lummus Technology is one of them. We have purchased a license and a basic design solution of the modernization of the FCC unit using the INDMAX technology, which will include construction of an ETBE production unit. This means we will be able to produce more propylene and high-octane gasoline components, which will significantly increase the value of our product basket. We hope to complete this project in 2024.

Propylene is an important raw material for the petrochemical industry and is one of the most expensive refining products.

This contract is part of the 80-million-dollars project aimed on upgrading the FFC unit, and the diesel fuel, gasoline, and gas production facilities.

What will this project mean for the refinery and for NIS in general?

As I said, the market we are part of is highly competitive, and for us to compete we have to continuously upgrade our capacities and expand the product range.

The implementation of the new technology and modernization of equipment will result in multiple commercial and environmental benefits for NIS. Beside producing more propylene and high-octane gasoline components we will produce more efficiently and cleanly. The environmental impact of the project will be the reduced emission of solid particles.

This project is the first instance of the Indmax FCC technology in Europe so we are happy to say we are the pioneers in the area.

What progress have you made with the bottom of the barrel project?

This is a key project in the second stage of the Pancevo Refinery modernization. The total investment is over 300 million euro. The unit will be put in operation this year placing the Pancevo refinery among Europe’s best with the refining depth of 99.2% and bringing multiple commercial and environmental benefits.

The construction of the Bottom of the Barrel unit started in 2017. It is a unique construction project: the work site area is approximately the size of two football fields where over 1100 people work daily.

So far, we have spent over 6 million working hours on the project. When choosing suppliers for the project we gave a preference to Serbian companies, so 70 to 80% of contracted personnel came from the Serbian market.

After the project is completed, the refinery will be able to produce even more top-quality fuel, primarily diesel fuel, and will start producing its own coke instead of importing. At the same time, we will stop producing high-sulfur fuel oil, which will let Serbia attain compliance with the international requirements in the area and contribute to the improvement of the overall environmental situation. Europe has already banned any use of high-sulfur fuel oil, and Serbia will soon follow suit. Fuel oil is a cheap product, even cheaper then crude oil, so instead we will produce more gasoline and diesel fuel as well as coke. We will still be producing bitumen, which has quite a good price this year due to high demand and to the fact that two refineries in the region do not offer this product.

What new projects are you planning for the refinery?

This industry in perpetual motion with new technologies emerging and markets changing all the time, so development and new investments are a must. NIS follows European trends in the area.

In addition to the project to improve conditions for biodiesel production and create conditions for biogas production, a number of projects are planned to improve the refinery’s operation over the longer term. First of all, we are working on energy efficiency improvement projects that pay off quickly and have very positive effects on the business in the long run. A number of digital transformation projects are underway, which will improve the efficiency of our business, educate our employees, and increase our safety. The refinery is consistently working to improve environmental protection.

Thanks to this business policy, the Pancevo refinery is the first energy facility in Serbia to receive an IPPC license, which confirms that all processes are fully compliant with the highest European standards in environmental protection. This license also obliges us to keep investing in the development using the best available technologies, which is what we are committed to do.

Where does the Pancevo refinery stand compared to other refineries in the region and in Europe?

Our starting position compared to other refineries in the region and in Europe was not very enviable, especially because of the years of sanctions. Today, NIS holds a dominant position in the domestic oil market and is one of the key players in the regional market. Improvement of the refinery’s capacity and efficiency, as well as technological development, have enabled the Pancevo oil refinery to be on par with European refineries today.

The completion of the Bottom of the Barrel project will bring multiple economic, technological and environmental benefits, putting our refinery among the leaders in Europe.

Certainly, considering market competition, both in the region and in Europe, we are focused on innovation and investment in technology following latest European trends. This is the only way to strengthen our competitive ability and successfully respond to the challenges of modern business and the fourth industrial revolution. I would like to emphasize that the competitive ability of a refinery is not determined only by the level of technology and energy efficiency. Investments in environmental protection and safety are also contributing to how competitive we are in the market. When it comes to HSE parameters, the Pancevo refinery is one of the leaders in terms of occupational safety and environmental protection. Our advantage is the great human potential, a significant number of highly qualified engineers, specialists of all professions, as well as young professionals who are eager for knowledge and who will certainly contribute to the successful operation of the refinery in the future.

Serbia will soon implement new requirements as for the share of biofuel in transport. Are NIS and the refinery ready for that?

We are logistically preparing for the implementation of this requirement. The refinery can already produce certain quantities of biodiesel, and we are ready to up that volume as well as to start the production of biogas in accordance with market needs and regulations.

NIS has long been working on including renewables in the motor fuel portfolio. The first phase of the project started in 2003 and was completed in 2015. The refinery is already able to produce about 600,000 tonnes of diesel fuel with the addition of biocomponents.

Of course this is not enough and we are working on implementing the second stage of the project which will lets us include biocomponents in motor fuels. We plan to use ethanol and ethyl tertiary butyl ether (ETBE) as biocomponents.

We plan to supply biodiesel and bio-gasoline by all means of transport – tank cars, tank trucks and ships. Design starts this year and commissioning will be gradual.

I would also point out that the refinery will produce stable biofuels, with environmental protection being our primary concern.