A Russian language classroom, equipped and refurbished within NIS’ Energy of Knowledge Programme, was officially opened in the ‘4th July’ Vocational High School in Vrbas

‘4th July’ Vocational High School in Vrbas is well known for its efforts to include the Russian language in teaching processes for many years. Classes are taught in Russian and, in addition to the regular curriculum, a number of other activities are being implemented: celebrating the Day of the Russian Culture, poetry recitation club and choir, pre-holiday winter Russian cinema, and many others. Since the students from this school regularly take part in NIS Russian Olympics, and owing to their achievements, NIS endorsed the refurbishment of the Russian language classroom in this school through its Energy of Knowledge Programme. The new classroom aims to encourage the study of Russian language and culture and to significantly improve school activities.

Anica Gračanin, Principal of the ‘4th July’ Vocational High School in Vrbas, welcomed guests to the ceremony marking the 74th anniversary of this school, and thanked NIS for its donation for refurbishment and modernization of the Russian language classroom, and the Russian Embassy for their support.

Milan Glušac, Mayor of Vrbas, thanked NIS for its donation for refurbishment of the Russian language classroom and confirmed that the Municipality of Vrbas will continue to invest a lot of energy to bring all projects of Serbian-Russian cooperation to life in this municipality.
“We only provided moral support for this project. NIS proved once again that it is a serious, modern and socially oriented company. The Russian Embassy and Russian companies are working for the future of young people. One of the most important issues is the employment and stopping the departure of young people from the country, and we will work on this together”, said Alexander Konanykhin, Cultural Attaché and First Advisor to the Ambassador of the Russian Federation. 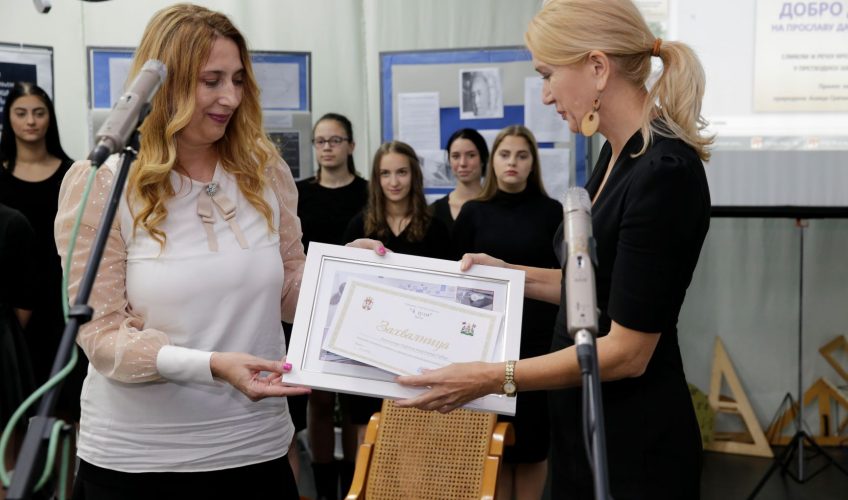 Snežana Lakićević, Advisor to the Deputy CEO of NIS, thanked professors and students of the school for the meaningful and emotional performance, and for their dedication that brought them remarkable results in competitions.

“Textbooks and books are also donations of the Russian House and the Embassy, our partners, and it is really heartening for us to be able to do so much for schools countrywide”, said Lakićević.

During the programme, a solemn academy was held to commemorate the 140th anniversary of the birth of the famous scientist Milutin Milanković.
On this occasion, School Principal Anica Gračanin presented Letters of Appreciation to NIS, the Embassy of the Russian Federation and other partners and friends of the School.

The Energy of Knowledge program was launched in 2012. In addition to supporting the development of natural sciences, NIS is also investing in the popularization of the Russian language, so 7 NIS Russian Olympiads have been held for students in the Republic of Serbia, Montenegro and Republic of Srpska since 2013. In 2014, NIS Russian Olympics was included in the official calendar of competitions of the Ministry of Education, Science and Technological Development. So far, 15 Russian language classrooms have been refurbished in schools whose students achieved remarkable results in NIS Russian Olympics. In 2019, cooperation with schools continued through donation of funds for adaptation and refurbishment of Russian language classrooms, and the first school for which the funds for the Russian language classroom were donated in 2019 is the ‘4th July’ Vocational High School in Vrbas. Through its Energy of Knowledge Programme, NIS is also supporting bilingual teaching at three schools in Serbia. NIS also cooperates with the Faculty of Education in Sombor, where a teaching staff base for bilingual classes in these schools is created. As a result of the cooperation between the Company and the BU Faculty of Political Sciences, the Centre for Russian Studies was established at this educational institution in 2018. A Serbian language course has been offered in the Russian School of the Embassy of the Russian Federation in Belgrade since school year 2018/2019, with the help of the BU Faculty of Philology.